intelligent participation in the inner and outer worlds of wine

What I Write About

I keep this website active even though I haven’t been very active with it. Back when I wrote a weekly wine column for the Portland Press Herald, I used this blog space as a way to update subscribers when a new article had been published. The last column I wrote as regular columnist for the Portland Press Herald came out in September 2016. (More recently, in summer 2019 I wrote a one-off article for that paper about selling wine in a beer town.)

Nowadays I still write about wine — most recently in the New York Times Magazine, in a “Letter of Recommendation” for Terry Theise’s wine catalogs (and, as you might guess, lots of other topics).

What I Work at When I’m Not Writing

For many years I was the wine program director at the Rosemont Market stores in Portland and surrounding towns. I still love selling wine, but I’ve left that position to do something that excites me even more — make it. A friend and I have started a winery right here in Maine, to make sparkling and aromatized wines — all from Maine fruit, grown organically. As soon as we can, we’re going to plant grape vines and then, a few years from now, we’ll have wines from those grapes to show you. To begin, we’re making our wines from wild Maine blueberries. It’s an incredible fruit, and I’m so excited to see how we can move them toward wines of real character, expression of place, and enormous deliciousness.

I’ll update this space whenever there’s good, bad, or interesting news to share, so if you’d like to stay informed, become or remain a subscriber. I’m also findable on Twitter (@joeyappel) and Instagram (@joeyappel1). I very much appreciate your support and interest.

Anyone who has followed this blog recently knows I’ve been taking a break from it for a while. But I just want to stick this here post up top to make it semi-official. I love writing about wine, and continue to do so through my weekly column in the Portland Press Herald. This blog has served mostly as a portal to those columns, and that seems kind of redundant to me.

So I plan on revamping the Soul of Wine blog soon, to consistently create original and more graphically interesting content. It will be a counterpart to my weekly columns, rather than a restatement of them. There are a lot of great wine blogs out there (too many probably) and I hope y’all go to some of them and gain from their myriad insights.

Meanwhile, feel free to drop a line or comment if you have any thoughts or suggestions on what Soul of Wine could/should be. I’ll be back! And please do follow my current activity via the Portland Press Herald’s web site, or on Twitter (and, less reliably, Facebook and Instagram). Thanks, friends.

A Collectivist Theory of Wine

Call today’s column “Notes Toward a Collectivist Theory of Wine”. Wherein I consider some of the social effects of being involved with wine. What does wine have to say about the growing disparity between rich and poor? Well, it says nothing. But we need to talk about how we behave in light of said disparity.

I mean, I wrote the column a while ago, and then along came the New York Times with an article on the famed Cantina Antinori’s new architecturally stunning winery/entertainment-megaplex. I’m not opposed to beautiful architecture! But what does it mean that this can happen?

I really don’t have any ideas. But until one or two come along,  I do have some suggestions for a sort of collaborative subterfuge, as we participate in the marketplace of wine. These suggestions involve attention, love, empathy…in other words, they’re not for the weak!

The question: Can California be a home for normal wines, at normal prices? We know it can be a home for ridiculous wines, and extraordinary wines, at prices befitting the adjectives we use to describe them.

But what about the sorts of table wines that Europe made us fall in love with all those years ago? Bistro wine, trattoria wine. Beaujolais, Dolcetto. You get the idea.

Kenny Likitprakong gets the idea, too. He’s the everything behind Hobo Wine Co. Aptly named. Kenny doesn’t own vineyards. He’s a hobo. He loves Woody Guthrie. He’s got a super loose attitude, but super tight principles and action. He represents the best of this country.

And his wines are just what I’m looking for: hand-picked grapes, wild yeasts (he, scientifically, calls them “uninoculated”), low alcohol (even the Zin has 13.6% alc!), no crap-addition or funny stuff in the cellar. The wines are limpid, supple, nuanced, and real. They don’t cost tons of money. The only unfortunate thing is that wines like this, from a place like that, are still in the minority. 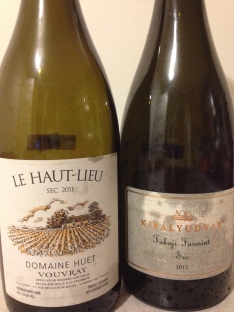 Don’t follow the grape. Don’t even follow the region. Follow the actual spirit of the thing. I love acidity-laced wines with huge mouthfeel. That’s my spirit-center:  wines that are both ringing with juicy snap and grounded with luxe-y heft. Spätlese as a way of life. Rare.

You know how when there’s something you know something about, and you talk with someone who’s interested in that something but has her or his facts a bit screwy, but thinks she or he knows quite a bit, and you want to correct the misinformation but don’t want to come off like a jerk, so you’re caught between fake-smiling and letting it go, or bringing the knowledge hammer down, and in the aftermath you resent yourself for either the fake abiding or the heavy-handed pedantry?

That was how I started my Portland Press Herald wine column last week. The rest of what I wrote was my way of exploring the best way to be of true help when you know something someone doesn’t.

Along the way, I mention some particular wines I like a lot — Chablis, Pinot Noir, Riesling — which betray many calcified notions we have of grape variety, region and style.

The big lesson is: Kill your idols, smash your categories. Every moment is a new one, and the primary purpose of your knowledge is to help you see how little you know. Knowledge to make you more curious, less rigid, more open and accepting.

Yes! The third in a recent  (unplanned) blog series of mildly misunderstood zippy/dry-white-wine categories that most people take for granted, my Portland Press Herald column a couple of weeks ago expressed pleasant shock at how interesting Vinho Verde could be. I’d had no idea.

But as always, it’s gottabedoneright. A lot of Vinho Verde is mass-produced by co-ops, from bought grapes that are held at low temperature from one year to the next. Hence, the absence of a vintage listing on that $5 bottle you plucked from the wine-shop cooler.

The good stuff rarely comes to the U.S., though that might be changing. Michael Hutchinson of MatadorVino, whose Portuguese portfolio includes several estate-bottled Vinho Verde wines (white, red and rosé!), told me all sorts of fascinating things about the region. (He also sent me a bunch of wines that I can’t wait to try and then write about, especially the organic and no-sulfur [!] ones).

Speaking of that $5 bottle, I got little-to-no beef with it. But I was a bit surprised that Eric Asimov, whose New York Times wine column is usually a well-considered and insightful overview of a given wine category, chose in his recent Vinho Verde column to speak only of the cheap-n-barely interesting stuff.

I gently called him out on this on the ol’ Twitter, and once the gracious Asimov retweeted that post, it led to a moderately lively exchange amongst a few folks. Bruce Schoenfeld, for instance, Travel + Leisure’s wine editor, tweeted: “The problem is, those small-batch VVs (and I’ve had plenty) run the flavor gamut from A to about D. Scant complexity.” I like the comment, but disagree. Which small-batch VVs has he had?  I’d say the gamut is more like A to J, which is pretty damn good for $10 wine!

You are currently browsing the Uncategorized category at soul of wine.

soul of wine
Blog at WordPress.com.